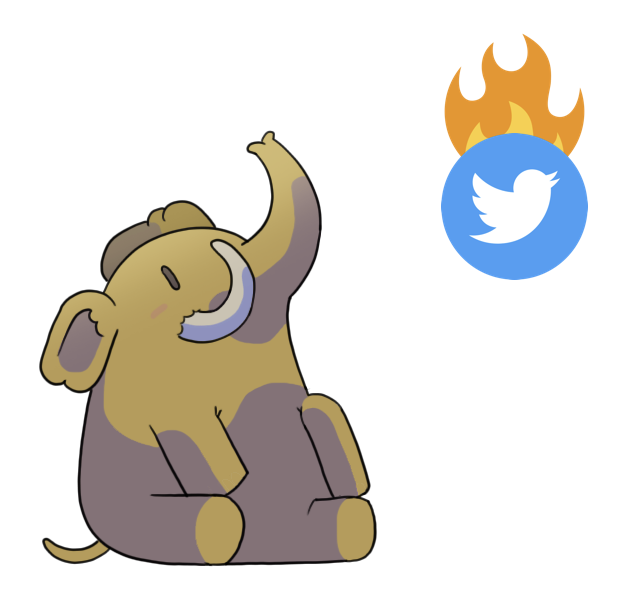 You probably can’t have failed to notice that Twitter is weird right now. There are some good writeups you can read in other places about the bad things that are going on (such as firing the entire accessibility team), and the further bad things that may happen as a result.

In the meantime, several people (about 230k in the last few days) have decided to seek out an alternative community micro-blogging platform, such as Mastodon, which is part of the Fediverse. It’s always difficult to turn your back on a platform after so many years, and learn new terminology and new ways of doing things. As someone who has now been using these things for just a few short days, I’d like to try to help anyone else who wants to make the leap!

The first thing to realise is that Mastodon is not a replacement for a Twitter experience. It’s a different, and I think most people will agree, better experience. To explain how it all works, let’s look at some of the individual components.

The Fediverse is the name given to a collection of connected servers that can share things with each other. The Fediverse gets its name from being a universe of federation. Federation in this context means lots of connected servers, that can run different types of platforms, and that are not owned or managed by a single entity (see how it’s different already?). These servers might share videos, or posts, or something else depending on the software they are running, but they mostly all share information with each other using an open standard called ActivityPub.

Mastodon is one of the most popular Fediverse platforms because it provides a very feature-rich micro-blogging social networking platform not entirely unlike Twitter (but again - better! I’ll explain more on that in a moment). In Mastodon:

From that basic point of view, it’s a similar experience to Twitter. Notably, the ability to do something akin to “quote tweeting” is disabled on most Mastodon sites. This is to try to limit the negative behaviour that, it turns out, quote tweeting has been promoting all this time.

Anyone with a bit of know-how and some server resources can run their own Mastodon instance. But that doesn’t mean that you’re joining a micro-blogging site with just a handful of people, because all Mastodon instances can share their posts and users with the rest of the Fediverse. You can follow anyone you like (unless they have opted to prevent people from following them), and it doesn’t matter which instance they are using, because all of the information is federated. People can even move their accounts from one instance to another if they want to.

So if everything is decentralised and federated, where do these individual server instances come into it?

This is the key thing that helps you build your own experience in Mastodon and the Fediverse. You can choose an instance run by and populated by like-minded people; and that doesn’t have to mean people who have exactly the same hobbies as you, they might just share the same sensibilities. Your instance admins will work hard to maintain the server, and provide rules on what sort of behaviour they expect. This allows you to join a community with rules you respect. You can easily discover people local to your server or of course explore the rest of the Fediverse, but it’s likely your server admin may restrict the sharing of information with instances that they feel go against their own rules.

So your experience is now based on like-minded communities, and exploring and building connections to other interesting people, while at the same time being protected from some of the more extreme elements of the Internet. And of course there are no adverts or corporate interests, so you’re no longer being manipulated by algorithms to keep you addicted to doom-scrolling. For those of us who’ve been around since the dawn of the Internet, it’s like a welcome return to the more community-focused, decentralised places we used to visit before we all became beholden to social media giants and their need for ad clicks.

How to Get Started

Even though Mastodon has been around for a while now, it’s still early days for its mass adoption, although I expect this to grow quickly with the exodus from Twitter. Right now though there aren’t that many user-friendly newbie guides for folks who aren’t already technically inclined.

The first thing you’ll need to do is choose an instance to join, and you should take your time to find the right base community for yourself. Don’t sweat it too much though, because you can move between instances in the future. Here’s some links to help get you started:

Once you’ve found your community, just start to explore and take your time. When you feel settled, you should consider supporting your instance admin in whatever way they deem appropriate.

For me, Twitter was always a way to keep up with tech news (and sci-fi, books, RPGs and all things Trek). But it was always hard work to remove the doom, gloom, hate and deliberately triggering click-bait. I’ve only been using Mastodon for a week or so, but it’s already the complete opposite of that experience, and as more people make the migration, I don’t feel like I’m missing any tech news either! (or sci-fi, books, RPGs etc.)